The Longest Day Is Only the Beginning: Seattle to Dehradun With ReSurge International 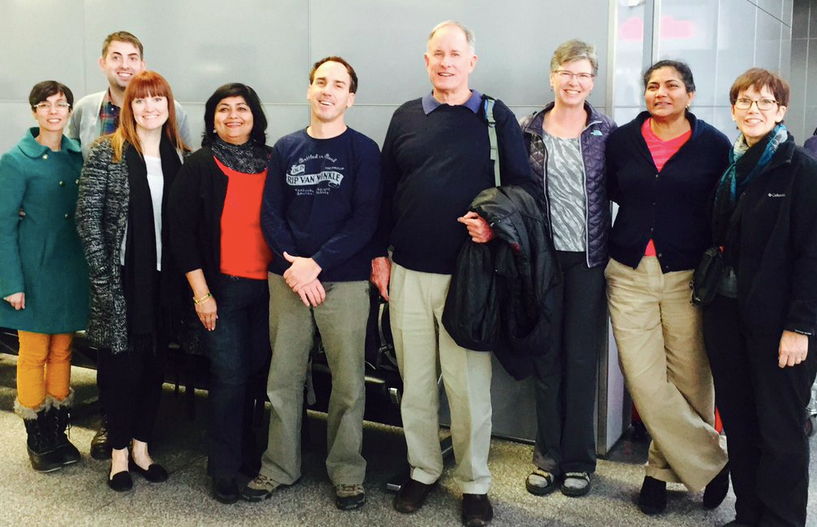 The Longest Day Is Only the Beginning: Seattle to Dehradun With ReSurge International

Sarah Durkee, a UX designer at RealSelf, was chosen to join ReSurge International on a trip to Dehradun, India, to help those in need of reconstructive surgical care. She’s pictured here (third from left) at the airport with the volunteer team of doctors and staff.

We traveled more than 36 hours to reach Dehradun. At 36, I stopped counting. There were four flights and a van ride, and it was an adventure, to say the least. But before I tell you about my purpose in coming here, I feel like I should tell you how I got here in the first place.

I never thought I’d go to India, and I definitely never thought I would experience it with a humanitarian organization. I feel honored to be here, witnessing what I am. I feel exceptionally lucky to be an employee of RealSelf, a company that feels so strongly about helping people — people on the other side of the world whose problems could more easily be ignored.

Through ReSurge International, a nonprofit organization that provides reconstructive surgical care in developing countries, RealSelf sponsored a team to travel to India. This group of plastic surgeons, nurses, and other volunteers donated their time and talents so those who have been severely scarred due to burns and accidents can be given much-needed medical care.

The night before I came, serendipitously, I met an Indian woman who described her home country as raw. She told me I’d see some of the poorest people I would ever see — many missing limbs and begging for food — right next to those whose lives oozed opulence. I forgot these words before boarding my plane to Dubai, but my experience on that first leg of the trip served as a stark contrast to what I would later see.

The plane itself was a double-decker, advertised as “the largest in the world.” Stairs reached up into a second level, where first class passengers enjoyed private suites complete with showers and a butler. (Or so I heard. I wasn’t actually allowed up there.) Even for those of us who didn’t shell out $20,000 for a plane ticket, economy was unlike any other I’ve experienced. We were given warm towels, served more food than we could eat, and provided other conveniences like sleep masks, toothbrushes, and 14-inch LED screens to watch any of the hundreds of movies available.

After more than 20 hours, four movies, and a plane-swap in Dubai, we touched down in New Delhi. I immediately noticed something different about the air. There was a heaviness to it — almost a smokiness — and a slight haze I couldn’t quite place.

When we stepped outside, it was still night. (It had been night for us for nearly 24 hours.) Local time was 2:40 a.m., though you never would’ve guessed it given all of the activity happening outside the airport. Horns blared, people crowded at the entrance, and men tried to carry our luggage so they might earn a small tip.

That’s when I realized what was different about the air. Through the glaring airport lights, the sky hung heavy with smog, a thick gray curtain that capped visibility at 20 meters.

A shuttle took us to the domestic airport, where we waited another eight hours for our next flight. We boarded a small twin-engine plane, where flight attendants served Dixie cups of water on a plastic tray. Finally, we landed in Dehradun.

The van that picked us up didn’t have enough seats, so two members of the group sat on the floor. As we sped past motorbikes and dodged oncoming traffic, I stared out the window, taking everything in. Hundreds of small shacks cobbled together from scraps lined the street. There were people selling snacks and produce, while others sold hot food cooked over stoves made from barrels. Judging by appearances, most of the people in this area were extremely poor.

We arrived at our hotel, where we dragged ourselves and our luggage upstairs to our rooms. I plopped myself on the bed and stared mindlessly at my phone for a few minutes. Then the lights went out. It was midday, but I was sitting in complete darkness. I realized my room had no window. I got up, found the door, and went up to the roof of the hotel. I gazed out over the tops of trees and the buildings of Dehradun. They looked abandoned, like modern ruins surrounded by jungle.

I wandered outside, where there were no sidewalks, just clumps of haphazardly parked vehicles and piles of garbage and rubble. I wove in and out of parked motorbikes, occasionally being pushed out into oncoming traffic. Within a few feet, I saw a bearded man sitting at the side of the road hunched over a fire. There was a blanket spread out on the ground nearby. I wondered if he lived there, if he called the side of the street his home. I contemplated giving him money, but kept walking. I felt guilt wash over me. I told myself I’d check on him the next day to make myself feel better about doing nothing to help.

I went back to the hotel to have dinner, where I kept nodding off at the table. The next day would be clinic day, where all of the people who traveled — some for days — in hopes of getting treatment would be screened by the surgical team. We’d have to get an early start so the doctors could have a chance at seeing the hundreds of people who needed surgery. I excused myself from the table and I walked to my room, where I poured myself into bed. The longest day I’d ever had was over, but I knew this was just the beginning of what’s sure to be a life-changing experience. I hope you’ll follow along with me in the coming days.